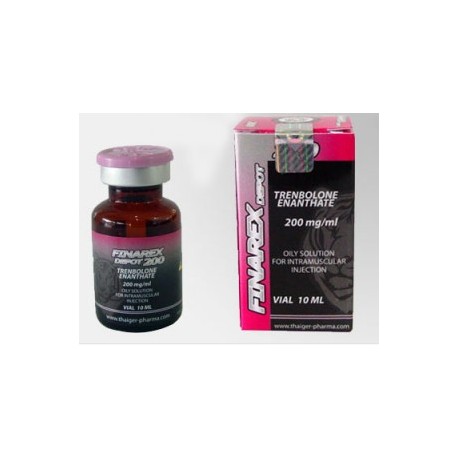 The chemical structure of Trenbolone Enanthate is 17β-Hydroxyestra-4, 9, 11-trien-3-one.Its other names and terms are Tren, Tren Acne, Tren E, Hexahydrobenzylcarbonate Cyclohexylmethylcarbonate, and Fina. Trenbolone Enanthate is produced by underground labs to replace Parabolan and its obscure ester. This is an oil based steroid and is basically used for veterinary purposes and for bodybuilding & powerlifting.

Trenbolone Enanthate is exclusively used to build up strength and mass. It is a viable compound for those who want to make minimal injections and at the same time use a nice lean-mass providing, non-aromatizing anabolic.

However, it is said that Trenbolone Enanthate does not aromatise, but since the estrogen manifests progesterone related side effects, such as gynecomastia, it should be seriously kept in mind while stacking it with other androgenic anabolic steroids, such as testosterone. Trenbolone Enanthate is also reported to be very harsh on the HTPA function. Moreover, its recovery is also said to be harsher than steroids and because of this, the use of HCG is often advised.

Trenbolone Enanthate (Tren) users widely experience side effect though they can expect rapid gains in muscle size and strength. The steroid is often used in cutting cycles due to its ability to cause hardening of the muscles, and positively changing a person’s body composition. Trenbolone Enanthate is also said to be responsible for some level of fat loss, but we should not rely on the compound for this benefit. Due to its high androgenic characteristics, Trenbolone Enanthate is not really a suitable steroid to be taken by women. It is generally used by athletes and bodyguards. It can also improve feed efficiency and mineral absorption in animals. A sports person is advised to take Trenbolone Enanthate in the beginning of the sports season and gradually stack it with other anabolic steroids.

Trenbolone Enanthate tends to bond to the Androgen Receptor very strongly and this is the cause of its fat-burning ability and muscle building abilities. Trenbolone Enanthate usage produces new muscle fibers in a considerable amount.This can be done partly by increasing IGF-1 within the muscle tissues and then by increasing the total amount of DNA per muscle cell.along with an increase in the sensitivity of the muscle satellite to IGF-1 and some other growth factors).Trenbolone Enanthate also increases both protein synthesis as well as nitrogen retention in muscle tissue and can bind with the (anti-anabolic) glucocorticoid receptor (6-7), hence it aids the muscle building process.

Trenbolone Enanthate strongly impacts on the endogenous testosterone and because of this, use of a stimulating drug like Clomid/Nolvadex and HCG is highly advised while ending a steroid therapy. Other wise, there might be a hormonal imbalance, for example testes may not be able to respond normally to the resumed output of endogenous gonadotropins due to an atrophied state.

Some of the other common side effects of Trenbolone Enanthate are Oily skin, aggressive behavior, hair loss and high water retention. An aggressive behavior is also reported with a higher dosage of Trenbolone Enanthate. Many athletes have reported that acnes tend to appear on their lower arm, upper arm, shoulder, chest, back, and also in their face during early stages of this drug’s consumption.Women should strictly resist it, under every circumstance.

The most common dose of Trenbolone Enanthate prescribed is 200 to 600 mg/ weekly. The dose can be changed according to medical advice. It may be dependent on the physical activity and strata of a person. This need not to be continued for around 10 week as it acts quite rapidly.