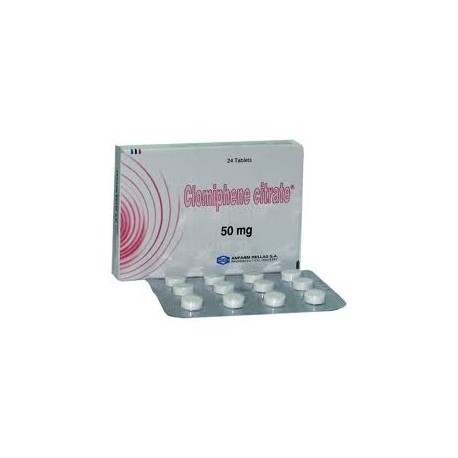 Clomiphene citrate (Clomid) is a synthetic non-steroidal drug that is very similar in structure to estrogen. It is widely used as an ovulatory stimulant. Because of its similarity to estrogen, it can bind to the estrogen receptors in the hypothalamus. This blocks the hypothalamus from sensing "real" estrogen and the hypothalamus in turn acts by stimulating the pituitary to release more Gonadotropins like FSH and LH. The FSH and LH stimulate the ovaries/testes to produce more estrogen/testosterone.
This property of clomiphene has been widely used to treat women with ovarian failure and induce ovulation. However, long term use of this drug may not be safe because of the increase risk of ovarian cancer.

Clomid is recommended for the treatment of women who have ovulatory dysfunction. Many women who fail to get pregnant have been found to have dysfunction in the ovulation cycle. Women with ovulation problems include those with polycystic ovarian syndrome and some with unknown causes of amenorrhea. Clomid is only prescribed after a thorough evaluation of the menstrual cycle is done to determine where the problem occurs. To achieve ovulation with Clomid, timing is of great importance. The woman’s body temperature is monitored and blood work is done to determine if ovulation has occurred.

Clomid is a very potent drug. However, with proper dose selection and short term therapy it can help infertile women. Clomiphene mimics estrogen in its actions. It has the ability to interacts with estrogen receptors in the hypothalamus and block these sites. The brain than thinks there is a low amount of estrone in the body and causes a surge in the levels of Gonadotropins which hyperstimulates the ovary to make more estrogen. This results in an increase in steroid synthesis in both the adrenal and ovaries. The surge in estrogen is important for fertilization to take place.

Clomid is only recommended for use in women with ovulatory dysfunction but also meet the following requirements:

- the female is not pregnant at the time
- Absence of ovarian cysts. An ultrasound is done on each female to rule out ovarian enlargement prior to therapy
- There should be no vaginal bleeding. If vaginal bleeding is present, the female should be thoroughly examined to ensure there is no evidence of a cancer
- all patients should have normal liver function tests

While Clomid has met with some success in females with ovulatory dysfunction, it has not been well studied in male infertility. Clomid has occasionally been tried out in Europe and the USA to treat males with fertility disorders. Clomid has been shown to promote the surge of LH, FSH with resulting increase in sperm count. However, these are isolated case reports and the therapy was only for a few months. No discernible side effects have been observed in these isolated case reports. However, there is concern that long term therapy with clomiphene in males may be associated with the development of testicular tumors and mild gynecomastia.

Clomiphene is a large molecule, which is soluble in most organic solvents like alcohol. The sodium salt citrate is also soluble in water. The chemical is odorless. Clomiphene comes as a 50 mg tablet.

Patients who receive Clomid must have been fully worked up for all gynecological and endocrine disorders prior to therapy. Ovulation typically occurs 5-10 days after starting Clomid. This coitus should be timed to coincide with the expected time of ovulation.

Clomid is started out at 50 mg/day for 5 days. This dose can be increased in females who do not ovulate.

Further, since Clomid blocks the estrogen receptors in the brain, the hypothalamus sends a surge of releasing factors LH and FSH to promote more synthesis of the sex hormones. The LH and FSH also act on the testes and this results in further synthesis of testosterone- which provides an extra boost for the athlete. Some body builders only take Clomid for the anabolic effects, whereas others combine it with a cocktail of other steroids and growth hormone.

Clomid is only taken once a day. Experts in the field of body building suggest that it be used alone or in combination with low potency anabolic steroids. Most body builders take anabolic steroids for a few months and then switch over to Clomid. The Clomid provides the surge in testosterone and also prevents the development of breast enlargement. The exact timing of when to start Clomid is not known but it is recommended that once the steroid drugs are stopped, Clomid should be started within 7-10 days.

A great many athletes and body builders do take Clomid, but the selection of dosage is very variable. While the drug is not recommended for body building, the dose has been empirically worked out. Most body builders take anywhere from 50-100 mg/day of clomiphene for a 2 week period. Some body builders recommend increasing the dose to 100 mg/day if no effects are seen. After the third week, Clomid should be stopped. This cycling phase has been developed by past body builders. Since no physicians recommend Clomid for body building purposes, it is hard to get proper medical advice on this drug. In any case, if you have doubts one may want to get advice from fertility experts who have the best knowledge about this drug.

The exact duration of Clomid is not known. There are no long-term data on the drug. In general one should avoid taking Clomid for pronged periods.

At the recommended doses for the short duration, Clomid is generally safe. The majority of adverse reactions that occur are transient and disappear once the treatment is stopped.

The most common side effects include the following:

Because Clomid acts on the brain, there is one side effect which is of great concern. By blocking the estrogen receptors in the hypothalamus, the hypothalamus causes release of stimulating factors to urge the pituitary to release the gonadotrophins. The pituitary gland is a small pea size gland which sits on top of the nerves going to the eye. As the pituitary gland is hyperstimulated, it’s size is increased. This results in compression of the nerves going to the eye. There have been many reports of visual changes in individuals who have taken Clomid for a long time. The vision changes vary from floaters, loss of partial vision, blurring, flashes, or clouding of the vision. These changes generally occur after long term use of clomid but there are reports that some individuals have developed these effects after only 7-10 days of use. Many of these vision changes occur spontaneously and thus, driving or operating machinery can be very hazardous. In the majority of cases, these vision changes have been reversed when the Clomid is stopped. The instant one develops vision changes, the drug should be discontinued and a visit to an ophthalmologist is highly recommended.

The other major side effect of Clomid is mood changes. There are many reports that women who have taken this drug for long periods develop a variety of behavior problems ranging from severe depression, anger, anxiety and aggression. Other changes also reported include paranoia, restlessness and insomnia.

Despite the worrisome side effects in some individuals, studies from many clinical trials show that these side effects occur in less than 1% of women. There are no hard numbers on how many body builders suffer from these adverse effects.

While Clomid requires a physician’s prescription for use in the treatment for infertility, the product is also widely available all over the internet-without a prescription. The cost of clomiphene is variable. The average cost for 100 pills (25-50 mg) cost anywhere from $50-100.

Clomiphene is readily available for anyone who wants to use it. However, all sporting organizations have banned the use of this drug in professional sports. The drug is easily identified in the urine for at least 5-12 days after use. In fact, the testing for clomiphene is very sophisticated and some laboratories even measure the levels of testosterone and estrogen, their metabolites and determine the ratio. When a certain ratio is seen, abuse with clomiphene is suspected.