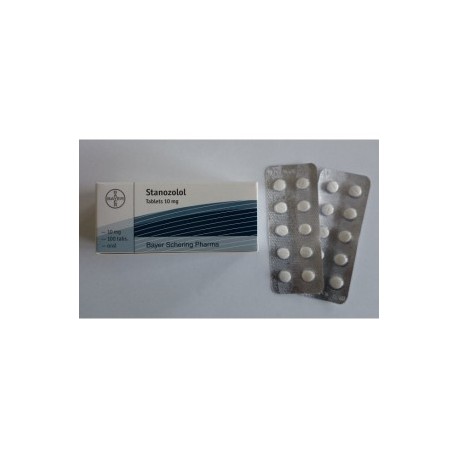 Winstrol or stanozolol is a synthetic anabolic steroid which resembles testosterone. Stanozolol is both an anabolic and androgenic hormone. In females it does cause virilizing effects.

Once widely available on the market, today it is a difficult product to find. Despite the hype on cyberspace about Winstrol being available, there have been many incidences of fake formulations or contaminants in products bought over the internet.

The lure of easy money has gotten many people in the business of selling fake anabolic steroids on cyberspace. And the DEA closely monitors each site because the selling and distribution of any anabolic steroid is illegal. Many Winstrol products sold over the internet have been analyzed and found to contain harmless cholesterol like molecules with contaminants. So for the bodybuilder interested in anabolic steroids, the internet is not is not the place to buy the drug as the purity cannot be established.

Winstrol a synthetic derivative of testosterone. It was first made by Winthrop laboratories in the 60s and is one of the oldest anabolic steroids on the market. It is indicated for the treatment of one major disorder in clinical medicine - hereditary angioedema. It has also been tried out as a treatment for extremely resistant cases of anemias and weight loss in HIV patients. The drug was once used to be used to treat livestock for weight gain. The intramuscular formulation given once a week was widely used but is hard to find today. The reason for this has been the widespread abuse of the drug and possible side effects.

Winstrol is used as an intramuscular formulation in the farming industry to boost weight gain in livestock. For human use, the drug is available as an oral tablet. Stanozolol is usually given at 2 mg three times a day for hereditary angioedema. Often it is continued for 1-3 months at 2 mg per day without any undue side effects. The drug is generally safe and can be taken at low doses for many months. The anabolic effects are generally seen after a period of 3-4 weeks and continue to increase over time. The drug also has some mild androgenic effects at high doses.

Like all anabolic steroids, winstrol also has some side effects. These effects are rare and most people tolerate them without a problem. The most common side effects include:

While most of these changes reverse after stopping the drug, some of the virilizing effects may be irreversible. For women who do take this drug, a word of warning. The drug should be stopped at the first signs of virilization because some of the masculine features may not reverse even after the drug is stopped. Winstrol has also been associated with reports of extensive liver damage which can be life threatening. Therefore, it is highly recommended that anyone using anabolic steroids regularly has their liver function regularly monitored.

Stanozolol is widely used by bodybuilders and other athletes. It not only increases weight gain but also increases exercise performance. The drug increases weight gain gradually but does not retain the water. It selectively burns the fat while retaining the protein. In medicine, winstrol is only used an oral drug with doses of 2 -6 mg per day in total. Because the drug has potent liver toxicity, the higher doses are not used.

However, bodybuilders seem to use a dose at least 5-15 times higher than that. One reason for this is that the THAI formulation appears to be less potent than the product made by Pfizer. Some bodybuilders use 30-40 mg/day and others use 50-100 mg/day. The major problem with oral dosing is that a lot of absorbed winstrol goes to the liver and is broken down. The drug can also be injected IM if one can get the supplies. The dose of an IM injection is about 50mg/day. The site of injection is usually the buttocks and this site must be altered every few weeks to prevent abscess and sores.

The injectable formulation is milky white in color with microcrystals. Fake stanozolol injectable products are common and there is no way to tell simply by looking at a product to determine if it is fake. Some bodybuilders claim that the real winstrol will reveal settled microcrystals at the base when standing - however, talcum powder can do the same.

The drug is typically used 1-2 months before a sports event. The drug must be stopped at least 2- 3 weeks before to avoid detection.

The majority of people do see muscle bulk build up after 3-4 weeks. Infact, winstrol can significantly improve exercise performance for short periods of time. Many reports exist of athletes who claim that spontaneous burst in energy are common after 3-4 weeks of use. However, this effect is not seen to last for long periods.

Despite what most builders believe higher doses of stanozolol are harmful and do not result in improved results. Most experts recommend that the drug not be used for more than 4-6 weeks.

Stanozolol is frequently used for 3-4 weeks and then cycled with other drugs. The most common other drugs are Masteron, Equipose, Oxandrolone, GH and thyroxin. Some individuals add Clomid to prevent the suppression of testosterone in the wash out period. Because stanozolol can cause water retention many athletes also use water pills to rid the excess body water.

Stanozolol is also widely used by females for two major reasons- it is a potent anabolic agent and has very small androgenic activity. This results in a body which lacks the virilizing features which are so common with the use of other anabolic steroids. However, when the drug is used at high doses or for long periods, the virilizing effects do appear. The unsightly virilizing effects are often not reversible even when the drug is stopped.

Stanozolol is banned for use by all sports organizations and its use is actively screened in the urine. The drug is easily detected in the urine for up to 5-7 days after the last dose. Most bodybuilders use this drug just before a sports event because of the mistaken belief that it is not detectable after a 2 week washout period. Recent advances in detection can identify metabolites of winstrol in the urine for up to 2 months. And one note of concern - the majority of bodybuilders are found to be users of anabolic steroids not because of the intellect of the scientists but because a colleague or someone close brags about the use.

There are many sites on the internet which claim to sell Winstrol. Considering that the DEA monitors all the sites, the validity of the products is in question. The most common formulation of winstrol available in the USA is from Thailand. Winstrol is also smuggled in the country from México, Russia and Europe. Further, many injectable forms of winstrol are obtained illegally from the veterinary market. Winstrol is not a cheap product. On average, each tablet costs about $2 or 200 tablets of 2 mg each can be bought for $150-$200.

Always get your pills from a reputable dealer to ensure that you are getting your money’s worth and the right product.

Stanozolol is classified under the Controlled Substance Act as a schedule 3 drug. It requires a physician’s prescription to obtain the drug. Anyone caught in the possession, selling or distributing the drug can be subjected to monetary fines and jail time. The recent incidence of steroid rages and unfortunate deaths, has also led to stricter control on prescription availability of this drug. Most physicians are reluctant to give this drug out for fear of abuse and the reciprocal effects may jeopardize their careers.