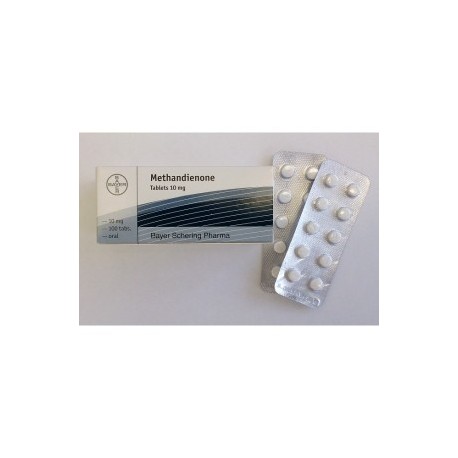 Dianabol is a synthetic steroid very similar in structure to testosterone. It is one of the oldest anabolic steroids on the illicit drug market. The anabolic properties of the drug were quickly realized soon after it was manufactured. It was first synthesized in 1958 at a time when the toxicity of steroids was not appreciated.

Infact, it was first marketed as a muscle growth agent and widely used in the 60s and 70s. Over the next decade, the drug proved to be a success for many athletes and bodybuilders, but soon the side effects of the drug became apparent.

All over the globe, bodybuilders complained of serious side effects and there were many cases of liver damage reported. Soon the drug acquired a bad reputation and in medicine its use only lasted a couple of decades. The drug was tried out as a treatment of infertility, muscle wasting and some resistant anemias. In the early 90s, the FDA finally banned the drug for use in humans. The drug is no longer manufactured anywhere in North America and most of Western Europe. The majority of Dianabol available today is manufactured in Mexico, SE Asia and China. The quality and purity of the preparations remain unknown.

Dianabol has been widely used by many athletes, professional movie stars and bodybuilders. In the 60s and 70s, there were no laws to prevent anyone from using this drug. The drug does have decent anabolic activity when used for short periods. At high doses, it also possesses androgenic activity. It rapidly leads to build up in protein mass and strength over a few months; it has been found to act on the liver, kidney, brain and even the heart. Studies indicate that it enhances exercise performance by retaining oxygen in the red blood cells and decreasing cellular respiration. The drug is also metabolized by the aromatase enzyme in the fatty tissue to estrogen. While it has some beneficial effects like increasing muscle mass, its effect on the heart muscle can lead to excessive enlargement of the heart. This often leads to heart failure or a heart attack.

Dianabol is still widely used by athletes in all sports. The drug is combined with a variety of other drugs to augment the body building process. The dose of dianabol ranges from 10-100 mg/day for 4-6 weeks. Most individuals see a result after 4 weeks. However, it is recommended that the drug not be used for more than 4 weeks at a time. It is often combined with other anabolic hormones like Equipose, Anavar or Winstrol to potentiate the effects.

The starting dose for a novice bodybuilder should be 10mg/day and this should only be gradually increased during the 2nd cycle. The drug is also converted to estrogen at high doses.  During the washout phase, some bodybuilders add Clomid or Nolvadex to the regimen to maintain the testosterone levels to a high. The addition of Clomid also minimizes the breast enlargement and water retention.

The weight gain is gradual and despite what is claimed on the internet, there is no acute gain in weight. The early weight gain is usually from the water and sodium retention and not build of protein.  To see benefits from dianabol, one has to take the drug for at least 4-8 weeks. Dianabol should not be taken in season because it has pronounced side effects. The drug should be started slowly during off season and continued at low doses.

The most important thing to remember when taking any anabolic steroid is to compliment the diet with high calories. Some of the weight gain seen with dianabol is due to water retention. Most bodybuilders will add 10-20 pounds in weight over 4 weeks when the diet is rich in protein.

Like all anabolic steroids, Dianabol has a range of side effects which include:

The majority of these side effects are rare when the drug is used for short periods. However, unpredictable complications like jaundice and heart attacks have also been reported. All females who consume this drug should be aware of the virilizing effects- some of which may not be reversible even after stopping the drug. For all users of Dianabol, when the drug is stopped the side effects do reverse but so does the weight gain.

The dose of dianabol is variable- some recommend starting at 10 mg/day and slowly increasing to 40 mg/day over a few months. Some bodybuilders even go as high as 100 mg/day but the side effects do become more prominent at such high doses.

Anyone taking dianabol is advised to follow-up with a physician; the drug has extremely potent side effects and can destroy your liver. Because it can increase water retention, this can affect the heart and cause high blood pressure.

Dianabol is rapidly absorbed from the stomach and lasts for 3-5 hours in the body. It is best taken with food and lots of water to prevent abdominal cramps. Despite its short duration of action, the drug can be detected in the urine for up to 1-2 weeks.

There are many sites on the internet who claim to have the drug but the question of purity still remains. There are many experts who claim that Dianabol sold in Cyberspace is fake since its use has not been shown to promote any type of body growth. There have been many instances where the Dianabol has been substituted for clenbuterol or other less potent drugs.

The drug is smuggled in to the USA from Mexico, Europe, Thailand and Russia. In Mexico it is sold under the trade name Reforvit-b. Law enforcement along the Mexican border is very aware of this drug and actively screen any suspicious package going through.

Despite the many dealers claiming that they have the real product, there is simply no way of telling unless one analyzes the tablet in a chemistry laboratory. And many laboratories have tested anabolic pills sold over the internet and the conclusion has been unanimous – fake or contaminated.

While there is no way of knowing who is selling what, it is best to seek a dealer who is reputable.

Dianabol is not used in medicine and is currently classified under the Control Substances Act as a Schedule 3 drug. All sports organizations have banned its use and the drug is actively screened for in the urine. The sophisticated testing systems available today can identify metabolites of dianabol in the urine for up to 4 weeks after the last dose.

Dianabol is not expensive provided you are getting what you are paying for. On average, the cost for 500 tablets (10mg) is about $200.

Dianabol is banned for use in clinical medicine in North America. Not only is it not available legally, it is classified under the Controlled Substance Act and that means, possession, selling or distribution of this product can lead to monetary fines and jail time. However, this warning has fallen on deaf ears among athletes who continue to use the drug.

Anyone wishing to increase the body mass should not select Dianabol. The drug is not manufactured any more. While Dianabol is still manufactured in some parts of Asia and Mexico, its purity and quality are questionable. To be on the safe side, try another product which is more easily available and can be checked out