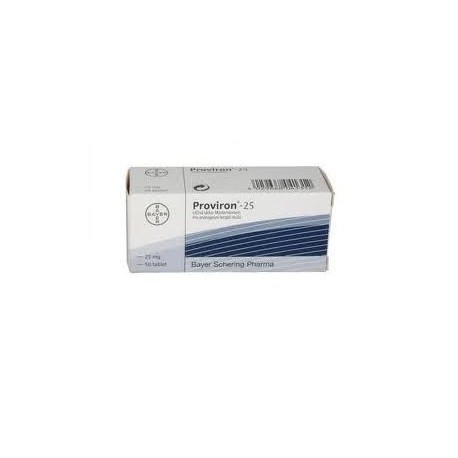 Proviron is actually a drug with anti-estrogenic activity. By blocking the estrogen receptors in the brain, it causes a surge in the release of the Gonadotropins (LH and FHS) which then induce the testes to make more testosterone.

The drug does not possess any direct anabolic or androgenic activity.

It was first synthesized in the 70s and by the late 90s had disappeared from the market. Schering the pharmaceutical company no longer makes the product. Every seller on the internet who claims they have the product is either not honest or is probably selling a fake product. There is no mass manufacture of this drug. While Proviron is available on cyberspace for sell, there are reports that the drug is smuggled in from in from Asia, Russia and Mexico. In all these cases, the authenticity of Proviron is in doubt.

It way initially tried out to treat both men and women who had depression and anxiety.

What was discovered in these studies was that the drug led to an increase in the Gonadotropins (LH & FSH) and increased testosterone levels. This then led to its use in the treatment of fertility problems. Today Proviron is no longer available and not used to treat any medical disorder. Almost without question, whatever is available on the internet is not Proviron and most likely fake or counterfeit.

Once upon a time, Proviron was indicated for treatment of testosterone deficiency, and male infertility problems due to a problem in hypothalamus, pituitary or testes

Proviron has more androgenic activity rather than anabolic effects. It is used by athletes and bodybuilders to help the body recover from the testosterone suppression that occurs after prolonged use of exogenous anabolic steroids.

The majority of bodybuilders who have used Proviron have been disappointed. The drug has failed to live up to the hype. Most users have claimed that the drug does not increase muscle mass or strength. In fact, the majority of individuals consider it a waste and unwarranted. Part of the problem may be due to the fact that the real Proviron is not available and perhaps people have been buying fake products. There are a lot of reports of counterfeit or fake Proviron products on the market. Unless the drug is tested in a chemistry laboratory it is impossible to tell what one is buying.

The drug does possess anti-estrogen activity like Nolvadex or Arimidex. Thus, it blocks the breast enlargement and water retention which are common side effects of most anabolic steroids.

Some users do claim that it causes the muscle to bulge and a rip- however, many of these users take so many other anabolic steroids; it is difficult to know which drug is actually responsible for the muscle growth. The drug has predominantly been used during the washout cycle to maintain the testosterone surge. Most knowledgeable athletes have stopped using Proviron and have turned instead to Arimidex or Nolvadex.

Proviron has also been used by females in the past. While there have been reports of its bodybuilding properties, there are just as many females who claim that the drug has done very little. Because of its anti-estrogen activity, all females who take this drug must be followed up by a health care professional.

Dose of Mesterolone is 25 mg by mouth 2-3 times a day for several months, followed by maintenance therapy for a few months. Proviron when taken orally is rapidly absorbed in the blood stream. It has a very long half life of close to 12-24 hours. It remains in the body for a long time and is easily detected in the urine for at least 2 weeks after the last dose.

Because the drug is not an effective anti-estrogen it is often combined with Tamoxifen or Arimidex. It is usually taken during the wash out phase.

Proviron is not recommended for use in:

The drug when available is expensive. What is in doubt is the quality and purity. All Proviron available today is available only on the black-market. The majority of the Proviron is smuggled into the US from Mexico and the Far East. One pill of 20 mg costs anywhere from $3-$4- and there is no way of telling if it is fake.

Proviron is a banned drug by most sports organizations. It is actively screened for in the urine. Because of its long half life, the drug is easily detected in the urine for up to 2 weeks after the last dose.

While it is not unlawful to possess Proviron, all sporting agencies to screen for it in the urine. In the USA, Proviron is classified under the control substance act as a schedule 3 drug.

Proviron is a drug which is relegated to the history books. The real product is not available anywhere. What is presently being sold is most likely fake or contaminated with other products. For those still interested in developing their body, Arimidex would be a much better choice